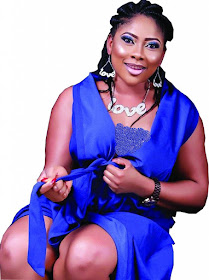 As dialectic as premarital s#x is, the Nollywood actress, Queeneth Agbor, recently revealed she is fully in support of the do before marriage, as she doesn’t want to end up with a man who is not active.

Speaking on the importance of initimacy in a relationship during a recent chat, Queeneth said, “To some people, s#x is associated with stability because it increases the bond and maintains a level of stability. As for me, I believe that sex is overrated in a relationship though I stand for s#x before marriage with a good reason.

“I need to test my ‘goods’ so I don’t end up with something inadequate. Cheating is a no-no for me. However, in a relationship, getting to know your partner doesn’t necessarily have anything to do with s#x. I prefer to bond mentally and intellectually. I know my lover for who he truly is. S#x gone badly can actually end a relationship before you even get to know the real person.”
The actress once revealed how her Igbo Boyfriend slapped her silly for kissing a guy in a movie she acted and vowed never to date an Igbo guy.

“I won’t be dating an Ibo guy again; they are possessive and could be violent.”

“I won’t be dating an Ibo guy again; they are possessive and could be violent.”

Famous for her role in ‘Hooked’, she moved from Calabar to Lagos to pursue her dream career.