The Nigerian man who destroyed five embassy cars in London earlier today has now been identified as Jeffery Apkovweta Ewohime.
He was arrested by the police in London. 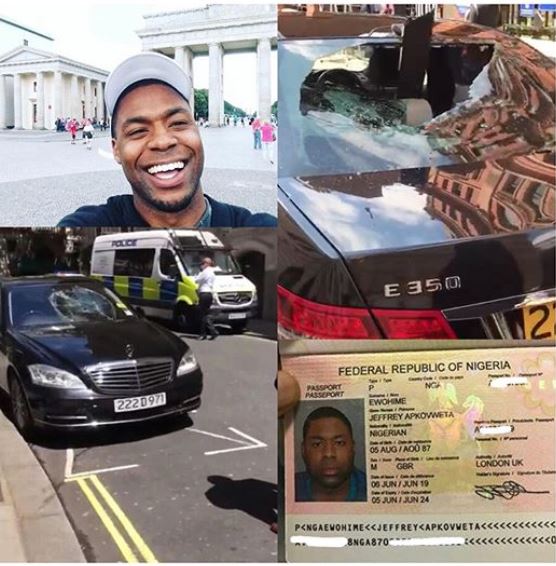 Sources said he initially caused problem at the Belgian embassy where his passport was confiscated.

Sources said he initially caused problem at the Belgian embassy where his passport was confiscated.

After he was turned back by the embassy because he arrived “late”, the 32-year-old lashed out by using iron rods and stones to destroy vehicles parked within the embassy’s premises.

Muhammed Babandede, the Comptroller General of Immigration Service confimed the incident in a statement Monday night.

According to him, Ewohime arrived the Nigerian mission in London for passport services.

He said, “He arrived late and was told by the Security that the Mission had closed for the day. He went about destroying Nigeria’s diplomatic vehicles worth hundreds of thousands of taxpayers money. The passport in question has been issued since 6th of June 2019. He did not leave any self-addressed envelope for delivery.”

Reacting through her media aide Abike Dabiri-Erewa, senior special assitant to the president on Foreign Affairs described the action as “unpatriotic, and an unconscionable act of indiscipline.”

In her account of events, Dabiri-Erewa said she received a report that Ewohime went to the Nigerian Embasy in London on Monday.

He had approached the Embassy to collect his passport which expired since November 2017 at about 2 pm and was told collection of passports closes by 1 pm.

He then insisted on collecting his passport, and was told to bring his collection slip which he could not produce.

According to reports from the Embassy, it would be wrong to hand over his passport to him, without his collection slip,

He, thereafter, left agitated and returned from a nearby hotel to destroy about seven cars, five belonging to the mission, and two to visitors who parked nearby.

“His attempt to destroy the high commissioner’s car failed as it is bulletproof. I am told that he has been arrested by the police. He destroyed seven brand new cars except the ambassador’s car which is bullet proof,” she stated.

“This is a despicable act, which must be condemned by all. Of course, the law must take its course.”