The Court noted that the plan by the Kaduna State government to issue licences to the pastors of Pentecostal Fellowship of Nigeria (PFN) using the Religious Regulatory Bill is a gross violation of their fundamental human rights, which guarantees freedom of association and freedom of religion.

The Court added that the passage of the religious bill is inconsistent with the Constitution of the Federal Republic of Nigeria 1999 (as amended). 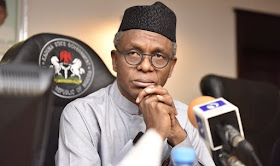 The judge, Hon Justice D. Gwadah, while passing the ruling, said that the actions of the Kaduna State House of Assembly in proceeding to pass the bill into law despite the pending court proceedings and the subsisting court injunction restraining the action, “is an affront to this honourable court”.

The case was instituted by the Pentecostal Fellowship of Nigeria (PFN) Kaduna chapter since 2016 against Kaduna State Governor (Mallam Nasiru El-Rufai), Kaduna State House of Assembly and the Attorney General of Kaduna State over the Kaduna State Religious Regulatory Bill.

The lawyers representing the respondents, in reaction to the judgment, said that their clients will go higher, meaning Gov El-Rufai and the Kaduna State House of Assembly will appeal the judgement.

But Barr S. A. Akani (lead counsel to PFN), who briefly addressed the press after the ruling, expressed satisfaction over the judgment on behalf of his client, the PFN.

Fellowship of Nigeria, PFN, through its lead counsel, Barr S. A. Akani, had sought a declaration, among others that the establishment of Religious Preaching Regulatory Committees vide section 6(1) and (2) of bill for the Kaduna state religious preaching regulation law for the purpose of screening preachers and entertaining applications for preaching licences constitutes a blatant invasion of applicant’s fundamental right to freedom of thought, conscience and religion enshrined in section 38 (1) of the constitution and as such unlawful, illegal and unconstitutional.


Re: “This is A Gross Violation Of Fundamental Human” – Judge Tells El Rufai over Quest To Licensce Pastors And Imams Before Preaching by Ghen Ghen! Miyetti Allah Calls For Establishment Of Fulani Vigilantes In South-East: 8:11 pm On June 20, 2019